The process of self-analyzing, of deep reflections and taking responsibility for our own actions is one that should never stop.  It should be a lifetime of quiet determination to become better and better at building the type of Quiet Power, Peaceful Confidence in knowing who our true self is. We can learn from our mistakes and become hope for our kind, that is, mankind. It’s a choice, an authentic deliberate and genuine decision, nothing less.

“Change happens in an instant. It happens the moment you decide to change.” ~Allyson Lewis

There was once a lion cub who somehow found himself growing with a pack of wild dogs.  He went everywhere with them, and did everything with them. One day, while playing with the pack of dogs in the wild, a male lion came by. He shook his captivating mane, and belted out a thunderous roar! All the wild dogs ran, and the little lion cub, after a brief hesitation and frown, turned and ran off with the pack he was familiar with.  They were who he was familiar with.  Their fear was his fear, their anxiety was his anxiety.  Their dread was his dread.  But after seeing that huge lion and hearing his roar, something from within began to nudge the cub.

He bent down to lap some water and saw his reflection, and for the first time ever, really looked at himself and saw who he was! Wait a minute! He looked exactly like the bigger lion! Wait a minute! If that lion could walk with such dignity, majesty, surety, magnificence and power, so could he! If that lion wielded such command, power and authority and could be so self –assured, so could he! He was not a wild dog after all, he was a majestic lion, who bowed down to no one, roared with power, and walked with authority! At this point it did not matter what had happened in his past, or how he got to be raised by a pack of wild dogs, or how he got into that situation in the first place! What did matter was that he had DISCOVERED himself!

The next day, the huge and commanding lion came by again, and belted out one of his booming roars.  The pack of wild dogs, once again, scrambled and ran off.  But the little cub, who had now found his true self, stood his ground, found his voice, refused to back down, and roared right back! His true nature had kicked in.

What have we, our own kind, mankind, become? What are we doing for each other? What are we doing to each other? It appears as though our capacity to hurt one another, to easily lash out at others, and to carelessly discourage and ruthlessly wound another have heightened to a point where we have become callous about our own kind, mankind. Is there something we can learn from that little lion cub?  Can we find our true secure selves, change and become better and better at appreciating ourselves and each other?  The young lion discovered how majestic, royal and powerful he really was. Can we reach deep within us and do the same?  What will it take!

I believe that we do have the innate ability and instinct to empower each other, even though everything around us indicates that we should be ruthless and selfish.  The trends we follow, the music we listen to, our own extreme indulgences, our entitled manner in which we behave and treat others, and our insecurities in not quite figuring out our individual identities and purpose on this earth, have influenced our actions in a not so good way.

If we discover our true identity, our true self, we will find that:

Have we not learned from the past, our own past and other people’s past?

Let’s take the time  to discover who we truly are, rethink who and what we have become, rethink our actions, rethink what we are doing to each other.

We CAN learn to care, because our true selves, from deep within, the beauty and virtue dormant in us, does care!  For the sake of all mankind, but most especially for tomorrow’s hope, the children, let us pull from the well of decency lying inside us, so that they will not pay the price for our mistakes, and suffer for our wrong doing! Like the lion cub saw who he truly was and could become, can the children do the same with us?

“Tomorrow hopes we have learned something from yesterday” ~John Wayne

Can we secure tomorrow’s hope?

I am deeply curious about God. I long to know why He sent us to this Earth. Why were we born? What is His unique blueprint, plan, purpose and agenda for each individual? What legacy should I, should you, leave behind? I hope and pray that they will be that of divine fulfillment and accomplishment, through the knowledge of Jesus Christ, God's guidance and instruction, and by the power of the Holy Spirit. I pray that we are daily divinely altered, illuminated, transformed, restored, made whole and empowered by Him, to make a beautiful impact and difference in the lives of those we come across in this lifetime. May God's kingdom come. May God's will be done. Now and forever. View all posts by ActivateGodsPurpose

Your Support Is Very Much Appreciated!

Your Gift Will Make Room For You!

3 John 2 King James Version (KJV) 2 Beloved, I wish above all things that thou mayest prosper and be in health, even as thy soul prospereth. 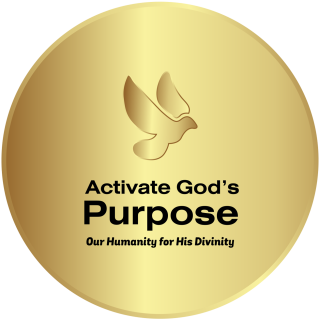 I firmly believe that God does have a divine blueprint and purpose for each of us individually, and collectively. We can walk in them if we yield our humanity to His Divinity. For I know the plans I have for you,” declares the Lord, “plans to prosper you and not to harm you, plans to give you hope and a future." Jeremiah 29:11 (NIV)